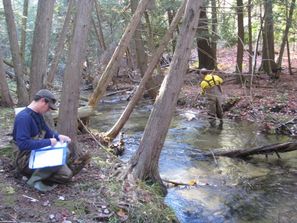 Grass River Natural Area, Inc. welcomes research proposals related to land conservation, wildlife ecology, applied science, and invasive species management to name a few. We are specifically interested in research projects which will enable us to make informed natural resources management decisions and implement best management practices on our 1,492 acres. The last comprehensive ecological assessment was conducted in 1984. Since then, ecological monitoring has been conducted on a small scale to help us gain a better understanding of the native and non-native plant and animal community that occur within Grass River Natural Area.

To read more about how GRNA is managing its natural resources, check out the revised Natural Resource Management Plan.

Please call Executive Director, Jenn Wright, @ 231-533-8314 if you have an interest in conducting research at GRNA. 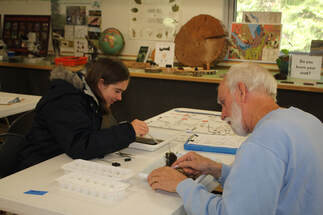 Twice each year in the spring and fall, GRNA staff and trained volunteers survey several sites along the natural area’s three cold water streams – Finch Creek, Cold Creek, and Shanty Creek – that ultimately flow into Grass River. These surveys involve collecting and identifying benthic macroinvertebrates, which are insect larvae and adults that live in the stream, as well as physical data on the stream, like stream depth. Each spring, staff and volunteers also conduct a full stream habitat assessment, collecting data on streambed substrate and vegetation, riparian zone quality, and any visible evidence of stream degradation. Because different types of macroinvertebrates vary in their tolerance to habitat degradation and because macroinvertebrates are an integral part of the aquatic food web, together the macroinvertebrate survey and stream habitat assessment allow GRNA to regularly evaluate the overall health of its streams, providing early detection of any measurable changes. Currently, all three of GRNA’s streams are relatively healthy, with the major concern being increased streambed sedimentation due to logging in the early- to mid-1900s before the area was protected.

The stream monitoring project officially began in 2013 when GRNA received a start-up grant from Michigan Clean Water Conservation Corps (MiCorps), a statewide network of water quality monitoring programs created by the Department of Environment, Great Lakes, and Energy. GRNA continues to use the monitoring protocol developed by MiCorps, allowing us to access MiCorps’ Michigan-wide database to compare the health of our streams not only over time but also to other streams around the state. Other partners in the stream monitoring project include The Watershed Center of Grand Traverse Bay, Three Lakes Association, Michigan State University, and the United States Forest Service. To become a trained volunteer stream monitor, email Emily Burke, Naturalist, at emily@grassriver.org. To read the preliminary stream health report from 2015, click here. 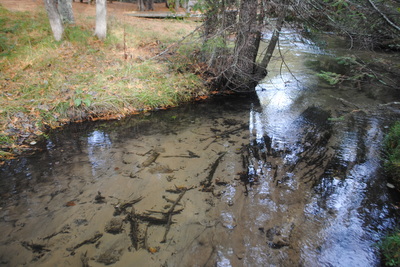 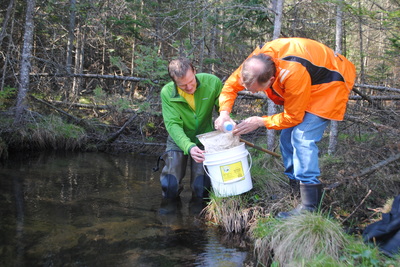 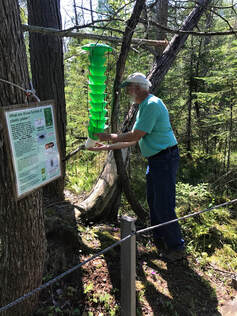 Bob Haack and Bill Ruesink, both retired entomologists, recently published a scientific paper listing over 400 species of Coleoptera (= beetles) they collected at Grass River Natural Area (GRNA).  They collected from May to September in 2017, using three different methods and focusing on three different habitats. They used baited funnel traps attached to tree branches to attract and catch flying insects, pitfall traps that were buried flush with the soil to catch soil-dwelling insects, and a butterfly net to simply sweep local vegetation.  The three main collection sites included one dominated by pine trees, another with hardwoods, and the third was in a cedar wetland. Many details are provided for each insect species, and comparisons are made among habitats and collection methods.  Of the 400-plus beetle species identified, 18 were reported for the first time as occurring in Michigan.

Bill Ruesink estimates that there could be as many as 1000 species of beetles actually living at GRNA, and that many more would have been found if they had sampled other habitats and used other techniques (like UV lights to attract night-flying insects).  In addition, Bill and two colleagues are creating a list of all known beetle species in Michigan, and that list now includes between 4000 and 5000 distinct species.  Given those numbers, we know that with 400 species, GRNA has at least 8-10% of all of Michigan’s beetles, and could have 20-25% of the total if the total number is closer to 1000 species present!

​The official citation of their research paper reads like this: “Robert A. Haack and William G. Ruesink. 2020. Coleoptera collected using three trapping methods at Grass River Natural Area, Antrim County, Michigan. The Great Lakes Entomologist 53: 138-169.”  The paper can be viewed and downloaded for free here. 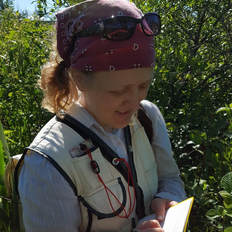 ​During the summer of 2017 Michigan Natural Features Inventory (MNFI) conducted a biological inventory of Grass River Natural Area through the support of the Grand Traverse Regional Community Foundation. Primarily using the meander survey technique, scientists from MNFI covered most of our 1,492 acres focusing on sensitive wetland communities and populations of rare, sensitive and invasive plants.

This report gives us a better understanding of habitat types and their delineations helps us to more effectively manage our natural area for the benefits of wildlife. To learn about what was found, read the full report of Natural Community Delineation and Floristic Quality Assessment here.

Thanks to the continued support of a Dole Family Foundation grant, we were able to conduct further stream monitoring on Finch Creek and Scrabble Creek.  With the help of skilled volunteers, seventeen target terrestrial invasive plant species were surveyed on these creeks during the summer of 2016 and 2017. This survey has allowed GRNA to document what species are threatening our stream side habitat to develop a invasive species management plan and also allows us to teach our volunteers how to ID invasive species.

Six unique species of invasive plants were identified along Finch Creek, the most abundant being bull thistle, Canada thistle and autumn olive.  European swamp thistle, multiflora rose and giant knotweed were also identified in varying degrees of density and area along the creek. To learn more about the methods, results and conclusion, read the full Finch Creek report here.

Four species of invasive plants in fifteen locations were identified along Scrabble Creek, a majority of which were autumn olive.  Bull thistle, Canada thistle and multiflora rose were also identified.  Twelve of the fifteen occurrences were located between the mouth of Scrabble Creek and Alden Highway.  To learn more about what was found, read the full Scrabble Creek report here.
UPLANDS SMALL MAMMAL TRAPPING - UNIVERSITY OF MICHIGAN
Dr. Philip Myers, a recently retired professor from UofM, trapped at GRNA for two nights.  Dr. Myers is an emeritus professor who continues to teach at UofM's Biological Station in Pellston. Each night he set a total of 100 traps, a mixture of large and small Sherman live-traps (suitable for mice, large shrews, chipmunks, flying squirrels).  He put out 4 lines of 25 traps within mature aspens and maples (with lots downed wood to provide cover) and within creek-side grasses and sedges.

Altogether 19 white-footed mice, 4 eastern chipmunks, 2 short-tailed shrews, 2 meadow voles, and 2 woodland jumping mice were caught.  The latter two were along Scrabble Creek.  Dr. Myers was very happy to see the jumping mice; "this is one of the species of "boreal" small mammals that is becoming very scarce in the northern Lower Peninsula."

Overall trapping success (32 captures in 200 trap-nights) is around average for mid-summer of most years.The GRNA white-footed mice were a good mix of young and old animals, and most adults were reproducing.  That suggests a strong population. More trapping will be underway in August. 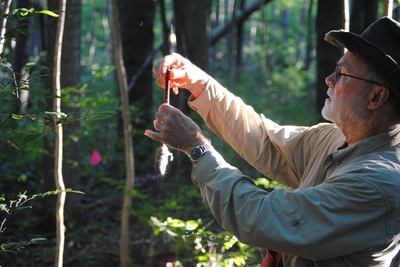 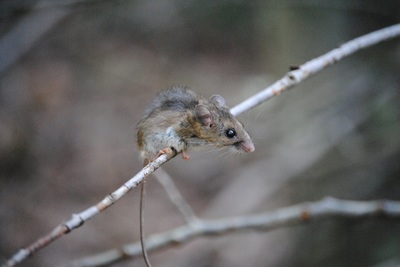 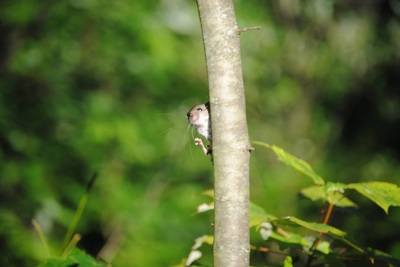